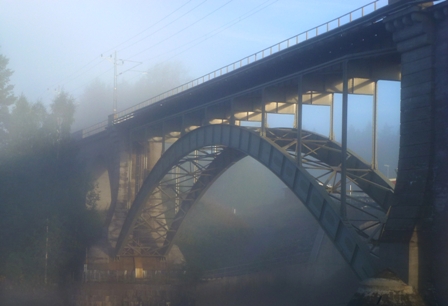 The Line between Älvsbyn and Piteå was built in the years 1911-1915.
It was one of many cross paths built between inland areas and the coast.

At Sikfors it was built at a location where the river channel was very deep, a bridge was therefore constructed. Railway bridge, which was introduced in 1914, consists of several parts.

There's a new power plant since 1986 with a high dam next to the bridge structure. The old power plant that were built back in 1911 is now out of service and a museum. The bridge is operated today by transport, including pulpwood train.